First, lets make sure we are talking about a security-based DVR (Digital Video Recorder)or an NVR (Network Video Recorder). These are very different from your home DVR used to record cable TV or movies.

A TV-type DVR has one or more inputs, and a TV tuner, to be able to record programs or movies on different channels or from different sources.

A security-type DVR or NVR operates, and is used, very differently. This type of DVR/NVR is used for monitoring and archiving security camera footage from one or more security cameras, and has a separate input for each camera that it handles. Each one of these inputs is a distinct “channel”, and can be programmed to monitor and record either full time, or when an event such as motion is detected in the video picture. Other recording triggers, such as doors opening or alarm activation are also available, and each camera, or channel can operate on a different schedule, different resolution, or even on different time schedules.  In the case of an NVR, the Recorder may have separate camera inputs, or it could have a single input, which is used to connect a Switch that has multiple cameras connected.

Once a user programs the DVR or NVR to follow the parameters that they wish, the system is fully autonomous and self-regulating. The operator does not have to be present for the system to do its’ job, because the Security Recorders can also alert or contact one or more people when a pre-programmed event or monitored area intrusion has occurred. This can be accomplished via phone, email or even an audible alert on a remote PC.

For instance, since a Security Recorder usually records to a hard drive instead of a low resolution tape, it enables Digital recording instead of analog, like a VCR. The advantages of a Digital format allows for multiple resolutions, quick navigation directly to an area of interest, or directly to a particular time or event. It also allows for various other data to be recorded simultaneously, such as audio, text-based motion or event log, and various forms of meta-data (such as cash register transactions, access control data, GPS coordinates, speed, etc.).

A Security DVR is smarter and works harder than a conventional TV-based DVR, and is able to perform many more functions. Truly a property-saving and sometimes even life-saving piece of equipment.

1.) Mount cameras in location desired. (Mounting screws are included with most cameras, but make sure they are the correct type and length of screw required for the substrate you are mounting the camera to.)

2.) Run all of your video cabling back to the DVR, or in the case of an IP System, to the Switch or there may also be plugins on the NVR itself.  IP Systems supply power to the camera in most cases, and in Analog Systems, there will be power wires, which will be connected to a separate Power Transformer or a Central Power Supply cabinet.

Label your cabling on the Recorder end and the camera end, so when you terminate your cables, you will be able to tell which wire to connect and will not need to “tone out” the wire to tell which one it is.

3.) Terminate all cables (If premade cabling was purchased your terminations have already been made for you.)

a. Video cabling – RG59, RG6 coax, or cat5/6 Power/Video/Audio wire with our EZ RJ45 connectors. (termination instructions for RG59 coax are included with your toolkit if purchased).

4.) Never cut molded power connectors off of the camera leads or cabling. Adapter leads have been provided if they are needed. For each of your cameras – connect the video wire at the camera end, and into the camera inputs at your DVR or NVR.

For separate Power wires for Analog cameras or with some IP PTZ’s, MAKE SURE ALL WIRING IS CONNECTED WITH THE CORRECT POLARITY. For low voltage camera wires the POSITIVE WIRES ARE ALWAYS RED!

Wrap all exposed connections with black electrical tape or heat shrink or Coax Seal to prevent any ground looping or corrosion.

NOTE:All high voltage electrical connections must be made by a licensed electrician.

(installation may vary depending on exact equipment purchased)

You have unlimited technical support with the purchase of your equipment, so please call with any questions you may have and our staff will walk you right through the installation.

What is an Infrared (IR)LED ?

A light-emitting diode (LED) is a semiconductor device that emits visible light when an electric current passes through it. The light is not particularly bright, but in most LEDs it is monochromatic, occurring at a single wavelength. The output from an LED can range from red (at a wavelength of approximately 700 nanometers) to blue-violet (about 400 nanometers). Some LEDs emit infrared (IR) energy (830 nanometers or longer); such a device is known as an infrared-emitting diode (IRED).

Benefits of LEDs and IREDs, compared with incandescent and fluorescent illuminating devices, include:

Wide Dynamic Range(WDR) Technology uses two shutter speeds in alternative video fields, high and normal, and combines these two fields into one frame. It allows every detail to be captured accurately even if one portion is bright while other portions are dark. As a result, combined fields yield a frame of high quality images. Below is a comparison of camera technologies with its video images of Regular, Backlight Compensation (BLC), and Wide Dynamic Range.

What is Super HAD CCD camera?

Efforts for more pixels and smaller size for CCD have resulted in a smaller aperture area of sensor, presenting the problem of lower sensitivity. To improve this, a lens has been provided on the top of the sensor for focusing, which increases the virtual aperture area of the sensor for higher sensitivity. That is what is called the on-chip micro-lens. Sony, the first to adopt it for the CCD image sensor, has thus successfully achieved higher sensitivity.
This “Super HAD CCD” optimizes the shape of on-chip micro-lenses in order to minimize the invalid area between micro-lenses on each pixel, which thereby minimizes the lost incident light. By doing so our product has been improved the sensitivity per unit of area, despite reducing the unit pixels.

What is an EX-View CCD camera?

“EX-View” is a sensitivity-enhancement technology developed by SONY to improve light sensitivity of its CCD by a factor of two for visible light and a factor of four for near-infrared wavelengths. Rugged CCTV has Ex-View capable cameras – ask an Engineer!
EX-View is a proprietary SONY technology in which the P/N junction of each photodiode in the CCD matrix is specially fabricated to have much better photon-to-electron conversion efficiency. In addition, each photodiode (representing one pixel in an image) has a microscopic lens fabricated over it to better capture and focus light onto the active semiconductor junction. This results in an improvement in light sensitivity of 2 times for visible light and 4 times for near-infrared (800 ~ 900 nm) compared to the conventional CCD versions offered by SONY. The lux rating of the EX-View CCD is two times better than the premium SONY “Super HAD” CCD for both visible and near-infrared wavelengths.

What is a CMOS camera?

A CMOS sensor is a kind of sensor that is normally used with Digital cameras.  They have developed over the years to be very versatile and, in many ways, superior to the older CCD sensors.  While CMOS is still working through some color approximation issues, on the whole, they have advanced to be a reliable camera sensor. 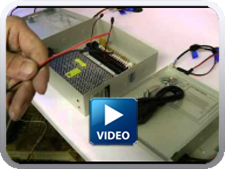 Video Over Cat5/Cat6 (Balun Use for Analog Cameras) 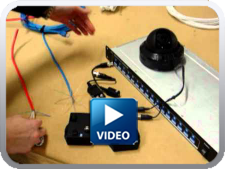 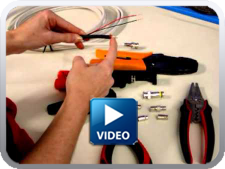 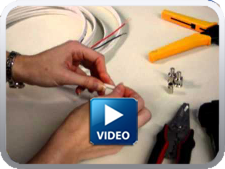 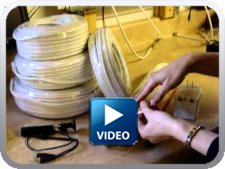